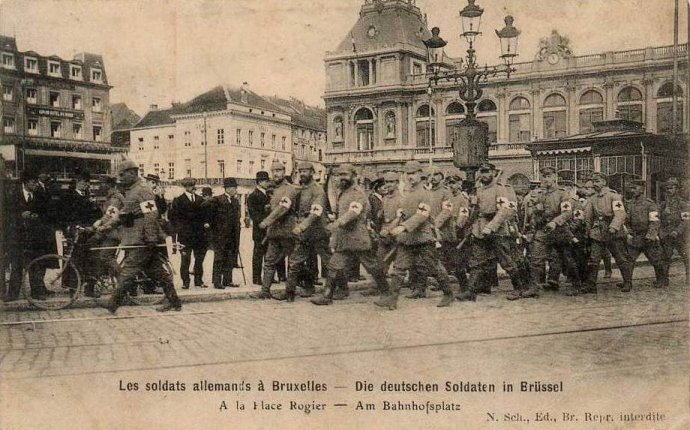 When the dust had settled, only a small sliver of Belgium south of the inundated Yser remained free — the rest of the kingdom, including the great cities of Namur, Liège, Antwerp, and the capital Brussels, had been taken. The popular Belgian King, Albert I, remained at liberty and in command of the ~150, 000-strong army that held the ground from Nieuwpoort through to Ypres.

All of this is fairly straightforward, but a peculiar thing has happened when it comes to the popular Anglo-American memory of the events that transpired in Belgium during the autumn of 1914: once the narrative of the war reaches the establishment of the trench system and the commencement of the long-standing stalemate that is viewed as such an essential aspect of the war in the West, Belgium and its people seem to vanish from the story entirely. Why might this be?

The answer to this question likely involves the troubled history of “propaganda” and its complex role in the war. A longer post on some other day will address this matter more fully, but in the meantime let it suffice to say that a great deal of propagandistic hay was made of the sufferings of Belgium in the war’s early stages — especially by British journalists, statesmen and public intellectuals. The most notorious example of this is likely the Bryce Report (or, more extensively, the Report of the Committee on Alleged German Outrages), first released in 1915. The report has long been a bête noire for those cultural historians examining popular attitudes during the war, it having been concluded by some very emphatic commentators in the 1920s and 1930s (such as Arthur Ponsonby in Falsehood in War-Time and Irene Cooper Willis in England’s Holy War) that the Report was simply a tissue of lies. Modern research, as we shall see, has confirmed that the Report’s conclusions were substantially correct.

As a consequence of this and other dismissals, the quite real and quite appalling sufferings of this nation and her people have since been unjustly swept away along with everything else that now smacks of the sensationalism, hate-mongering and outright invention that are believed to have been the propagandists’ stock in trade. This would be a too-simple evaluation of the situation in general terms, but, in the case of the plight of Belgium, it is a very serious error indeed.

As we approach the beginning of the war’s centenaries, it is only fitting that pieces of the puzzle that have hitherto been missing finally be put back into place. So:

It is true that many of the more sensational stories of German “outrages” perpetrated in Belgium during the course of the invasion and ensuing occupation are very hard to believe, much less corroborate. German soldiers eating Belgian babies; German soldiers hanging Belgian nuns between church bells and ringing them to death; German soldiers crucifying dozens of farmers by the roadside; and so on — these are stories that are familiar to us through the fact of them having now become standard examples of why “propaganda” is not to be trusted. Claims like these (it is said) poisoned the home front’s understanding of the war; works that made such claims disgusted the war poets and memoirists so much that they rose up in reaction against them; stories of this sort caused the English-speaking peoples to be so skeptical of atrocity reports that they were too late in reacting to the events of the years leading up to 1939. All of this is considerably more complicated than these summaries suggest, but, again — a post for another day.