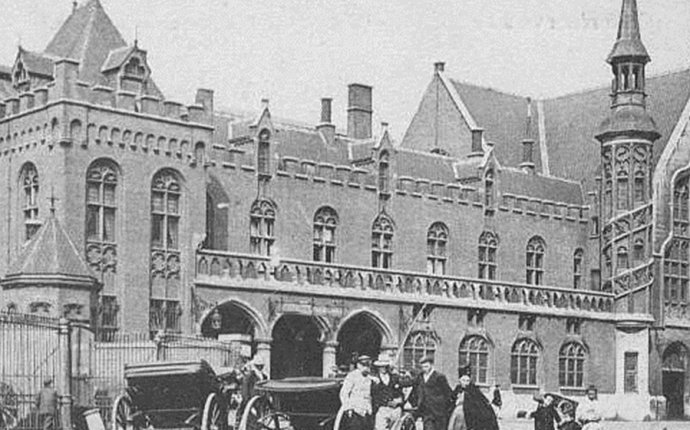 As in other Flemish cities, textiles were Bruges’ ticket to prosperity. Much trade was connected to England’s wool industry, the source of the finest grade of wool, and by the late 13th century Bruges was a major cloth-trading centre. When Philip the Fair, King of France, visited Bruges in 1301, his wife, Joanna of Navarre, was so surprised by the inhabitants’ wealth and luxurious clothes that she purportedly claimed: ‘I thought I alone was queen, but I see that I have 600 rivals here’.

But the city’s increased wealth brought political tension and, after guildsmen refused to pay a new round of taxes in 1302, the army was sent in to garrison the town. Pieter De Coninck, Dean of the Guild of Weavers, and Jan Breydel, Dean of the Guild of Butchers, led a revolt against the 2000-strong army that would go down in Flanders’ history books as the Brugse Metten (Bruges Matins). Early in the morning on 18 May, the guildsmen crept into town and murdered anyone who could not correctly pronounce the Flemish phrase ‘schild en vriend’ (shield and friend). This revolt sparked a widespread rebellion and led to the Flemish victory against the French six weeks later at the Battle of the Golden Spurs near Kortrijk. Independence was short-lived, though, and the French soon regained control.

In the 14th century Bruges became a key member of the Hanseatic League of Seventeen Cities, a powerful association of northern European trading cities, and the city reached its economic peak. Italian cities such as Genoa, Florence and Venice built trade houses here, and ships laden with exotic goods from all over Europe and further afield docked at the Minnewater, a small lake to the city’s south.

Prosperity continued under the dukes of Burgundy, especially Philip the Good (r 1419–67), who arrived in 1430 to marry Isabella of Portugal. Bruges grew fat and by 1500 the population had ballooned to 200, 000, doubling that of London. Flemish art blossomed and the city’s artists – known as the Flemish Primitives – perfected paintings that are still vivid today.

During the 15th century the Zwin, the waterway linking Bruges to the sea, silted up. Despite attempts to build another canal, the city’s economic lifeline was gone. When the headquarters of the Hanseatic League moved from Bruges to Antwerp at the end of the 15th century, many merchants followed, leaving abandoned houses, deserted streets and empty canals. Bruges, a former hub of Europe, slept for 400 years.

The city slowly emerged from its slumber in the early 19th century as tourists passed through en route to the Waterloo battlefield near Brussels. In 1892 Belgian writer and poet Georges Rodenbach published Bruges-la-Morte (Bruges the Dead), a novel that beguilingly described the town’s forlorn air and alerted the well-heeled to its preserved charm. Curious, wealthy visitors brought much-needed money into Bruges, and sealed its fate as a town frozen in time.

In 1907 the Boudewijnkanaal, a canal linking Bruges to the new port of Zeebrugge, was constructed. Although Zeebrugge suffered extensive damage during both world wars, Bruges escaped unscathed. As the capital of West-Vlaanderen province, it now lives largely off tourism, although it also has a manufacturing centre outside the city that produces glass, electrical goods and chemicals.