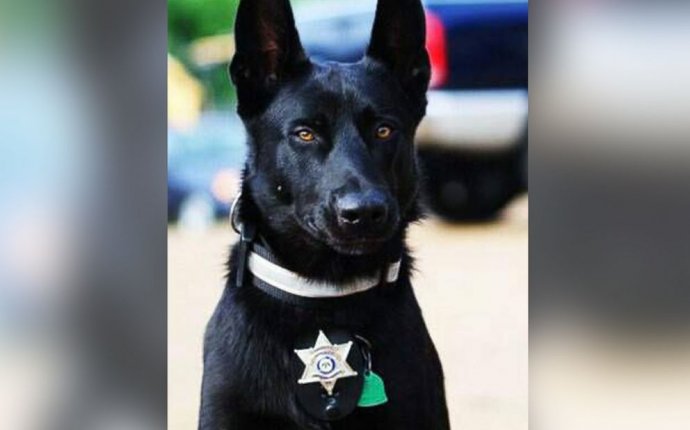 A German Shepherd (file photo), carrying a surveillance camera, is said to have miraculously dodged the bullets and police in Belgium have hailed the canine as the hero of the siege

A German Shepherd, carrying a surveillance camera, is said to have miraculously dodged the bullets and police in Belgium have hailed the canine as the hero of the siege, according to The Sun.

Belgian investigators are still hunting two suspects who fled the apartment one day after a police sniper killed the gunman holed up inside.

Authorities found a stock of ammunition and an ISIS flag there, according to officials.

Four officers were wounded in the joint French-Belgian raid in a Brussels neighbourhood and related searches.

Prosecutors yesterday released, without charges, two men they held in the wake of the raid, leaving the hunt on for two suspects who have not been identified. Prosecutor Eric Van der Sypt said they 'are being actively sought'.

Illegal immigrant Belkaid's only contact with authorities appeared to be a two-year-old theft charge, said Thierry Werts, a Belgian prosecutor.

ISIS fanatics murdered 130 people in the French capital on November 13 when they targeted bars and restaurants, the Stade de France stadium and the Bataclan music hall in a wave of gun and suicide bomb attacks.

Masked police forces seen on Chaussee de Neerstalle, Neerstalle Steenweg, near the site of a shooting in the rue du Dries-Driesstraat in Forest-Vorst, Brussels yesterday

In November, the mastermind behind the Paris terror plot was killed during a special forces siege on a flat in Saint Denis, close to where four arrests were made today.

Abdelhamid Abaaoud, 27, died in a gun and grenade battle which saw 5, 000 rounds of ammunition fired by police. Officers were seen removing two bodies from the apartment this afternoon.

French prosecutor Francois Molins revealed that neither Abaaoud nor Salah Abdeslam, who went on the run after the attacks, were among the seven people arrested in Saint Denis that day.

@marytheluckyone Indeed, over 1500 at last count - there's even enough Dutch and Belgian footballers to now have a Jari XI!