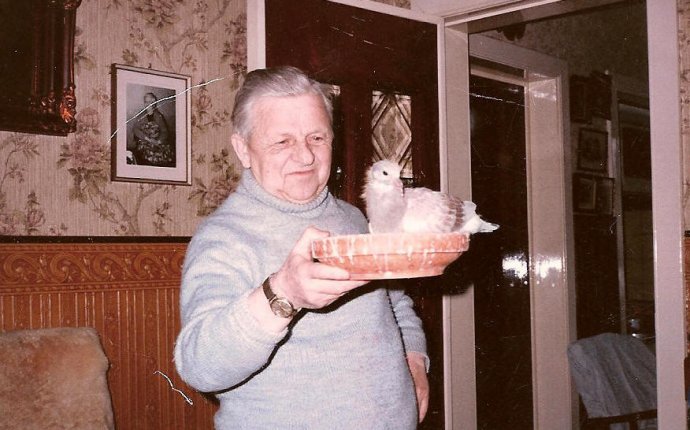 We have learned that the world-famous pigeon fancier Louis Janssen from
Arendonk (Belgium) has passed away. Louis died this morning (16 April) at the age of 100. He would have turned 101 on 5 August 2013. The funeral will be held on 22 April at 11 a.m. in the Onze Lieve Vrouwchurch in the centre of Arendonk. The PIPA team and all its visitors wish to extend their deepest condolences and sympathy to the family and friends of Louis. We wish them much strength and courage in these difficult times! Louis Janssen, the last member of the illustrious Janssen pigeon family, has passed away.The death of Louis Jannsen marks the end of a legend. This was probably the greatest success story ever in the long history of pigeon racing!
There is one thing we can all agree on: the Janssen brothers from Arendonk have been the
greatest ambassadors of the Belgian racing pigeon worldwide. Fanciers from anywhere in the world have been playing with the famous Janssen pigeons and owetheir success to this amazing pigeon breed. There has never been a better pigeon breed than the glorious breed of the brothers from Arendonk. No wonder the loft in Arendonk has turned into a sacred place for many fanciers. Thousands of visitors from all around the globe have paid a visit to the lofts in Schoolstraat 6. The Janssen pigeons were world famous, not only thanks to their own achievements but also thanks to the achievements of thousands of other pigeon fanciers who obtained descendants in Arendonk. They were mainly successful in the sprint races in the region Only the brothers knew their pigeons inside out. They knew their pigeon breed like the back of their hand. They knew how to handle their slate blue, clear blue, white-eyed, red-eyed and yellow-eyed pigeons every season again. It was their secret weapon with which they managed to breed a homogenious group of great pigeons year after year. These pigeons have very soft feathers, supple wings and well defined and strong muscles. These pigeons look great and they are generally in great health. These pigeons have everything you need! The Janssen brothers were always limited in space and the number of pigeons that could spend the winter in Arendonk was limited to 80 to 100 birds. In the last few years there were only a few couples left in their loft. Janssen wanted to keep things simple, regardless of their worldwide...

RT @BahrainEmbBE: #University_of_Bahrain students during a visit to Belgium to explore the international community experience in communicat…