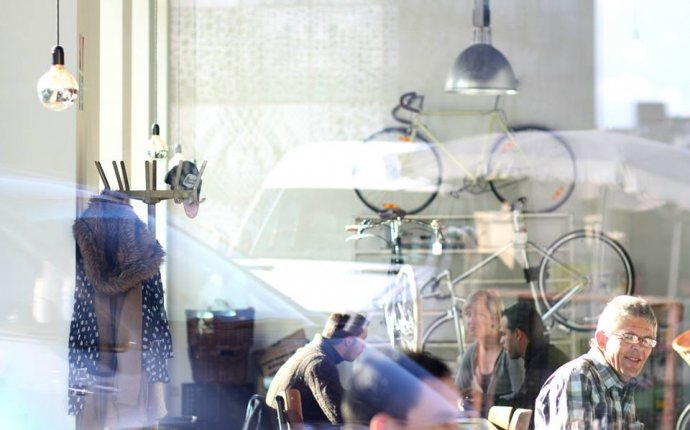 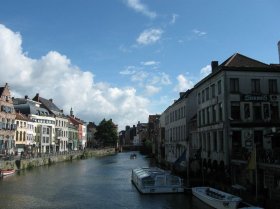 I’ve been to more bars than is healthy, and seen many strange drinking traditions, but I’m sure there can be no bar-room custom as bonkers as the one I experienced on my stag-do inside Dulle Griet, in the beautiful Belgian city of Ghent.

On one of Ghent’s many pretty square’s, Vrijdagmarkt, is the Dulle Griet pub ( Named after a Belgian nursery rhyme character, it has an unassuming appearance from the outside, looking like hundreds of other Flemish boozers. But step inside, order a glass of house beer and the fun and games begin.

Dulle Griet sells over 260 different beers and claims to have the widest selection in Belgium’s third largest city, but there is one you have to try – the house beer, Max. It’s served in 1.2 litre test tubes which are held in wooden racks and bubble away like a chemistry experiment before you. 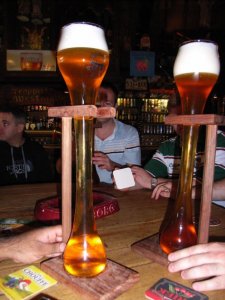 The test tube/rack combo is so expensive, the waiter will ask you for a shoe as deposit which he puts in a basket and winches to the ceiling. You won’t get your shoe back until you’ve supped-up and returned the glass.

With its perfectly rounded bottom, this type of glass is known as a coachman’s glass. Its thin neck allowed mail coachmen to be able to enjoy a beer without taking their thick gloves off in days gone by. Unfortunately, there were no coachmen on my stag-do and none of us really knew what we were doing – should we take the glass out of its stand, or should we drink while the glass is firmly in its stand? 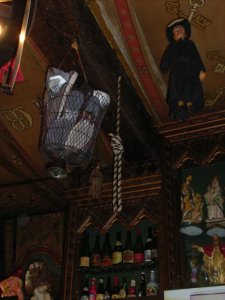 And it was even harder to drink from dressed as a cow!

Max comes in blond or dark versions, and with both at 7.5%, it’s probably a good idea to start rather than end the night here unless you fancy walking home with one shoe. I’m pleased to say none of us lost our footwear, and after a fun couple of hours in Dulle Griet, we moved on to continue our pub crawl around Ghent.

Ghent seems to be in vogue at the moment and is on a lot of those “cities you must go to this year” lists you see. I hope you don’t feel too cheated at reading this if you were expecting a full city guide – my visit was almost five years ago now, and drinking beer was our priority, but have a read of this if you want to see what else Ghent has to offer.

A lot of people prefer it to Bruges, saying it’s just as pretty and medieval but it doesn’t have hordes of tourists. People actually live there, and it has a large student population giving it a bit of a creative edge. Me? I think it’s 50/50, although I need another trip to Ghent and it’s famous shoe bar to decide once and for all.