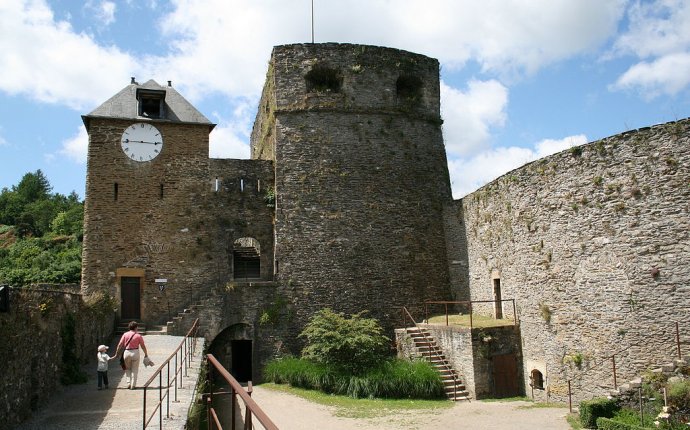 Though the first mention of Bouillon is in a text dating from 988, there can be no doubt that it existed for centuries before then.

Experts agree that the name goes back to the Gallo-Roman period. In the absence of conclusive documentation it is not possible to put forward any precise date for the foundation of the castle. Historically the castle commands the north-south passage between the Upper and Lower Lotharingia, those famous -avenues des Frangais, (Avenues of the French), the natural route of all south-bound invasions until 1940.

The history of the castle closely parallels that of the town and the Duchy, it comprises three distinct periods:

1) The Dukes of the House of Ardenne (Godfrey was the fifth and last on the line) owned the castle until 1096, when Godfrey of Bouillon sold all of his Duchy to Otbert, prince-bishop of Liege (with the possibility of buying it back after three years). Otbert plundered the churches and monasteries of his own diocese to obtain the money to enable him to meet the outlay of the first crusade. The Duke conquered Jerusalem and died there in 1 1 00 with the title of “Defender of the Holy Sepulchre” after having refused to wear the gold crown of a king “where Jesus Christ had worn a crown of thorns”.

2) The Prince-bishops of Liege kept the castle, with many historical ups and downs, for nearly six centuries.

3) This valued possession finally slipped away from them when it was usurped by the La Marck family. For the sake of convenience, the prince-bishops had delegated their powers to governors and in 1430 they appointed as governor Count Evrard III de La Marck, one of the great feudal lords of the principality. This family was restless, turbulent, ambitious and, above all, unscrupulous. At the beginning of the XVIth century, the holder of the family title assumed the title of Duke of Bouillon concurrently with the prince-bishop of Liege. In 1591, Henry de la Tour d'Auvergne, father of the famous Turenne, married Charlotte de La Marck who died without issue. Because of this he inherited her estate. Therefore, without owning the castle, the La Tour d'Auvergne bore the title of Duke of Bouillon. Being as restless as the La Marck family they ended up having the town and the duchy handed over to them in 1678 by Louis XIV whose troops had conquered them in 1676; this taking over of the title is officially confirmed by the treaties of Nijmegen (1679) and Ryswyk (1697).

All through the XVIIIth century Bouillon was a type of oasis of liberty, up until the 24th April 1794 when the assembly of people (the Duchy numbered about 150 villages) proclaimed a republic. Then, according to the pen of a XlXth century writer, -The shark of the Seine gobbled up the republican gudgeon of the Semois. On the 26th October 1795 the pure and simple merging of the French Republic (department of the forests) took place

After Waterloo, the second treaty of Paris (20th November 1815) grafted the ancient sovereign land of Bouillon to the Netherlands. In 1830, after the Belgian Revolution, the Duchy was integrated into Belgium.