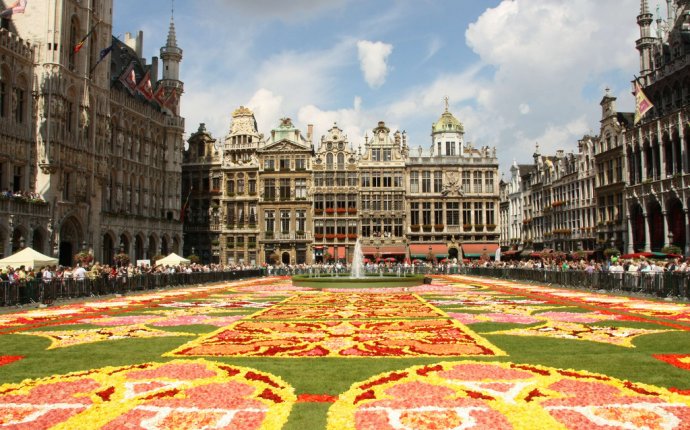 Things to See in Belgium Brussels

Brussels has the honour of being not just the capital of Belgium but also that of the entire European Union. From a small 10th-century fortress town, Brussels has grown into a multilingual, multicultural city. However, it still retains its old-world charm and quintessentially European feel. Here’s our pick of the top 10 things to do in Brussels – no, it’s not just about the (excellent) chocolate!

Grote Markt or Grand Place is one of Europe’s most stunning public squares, containing architecture spanning three different eras. Baroque buildings rub shoulders with the Gothic Town Hall with some Louis XIV styles thrown in. Historically, the square was a market place, which explains the food-related names of the streets surrounding it. Today, the Grand Place is the most happening part of Brussels with many shops, restaurants and cafes. Every two years in August a colourful flower carpet of thousands of begonia is set up in the square – it’s quite a sight so time your visit accordingly.

The Museum of the City of Brussels is also known as Maison du Roi (King’s House) or Broodhuis (Bread House). It’s located in the Grand Place and faces the Town Hall. The museum documents the history of Brussels through paintings, engravings, sculptures and other art forms. There is also an impressive scale model of the town during the Middle Ages. There is an entire room dedicated to some 750 costumes of the Manneken Pis, Brussels’ most famous statue. You can take a free, guided tour of the museum (there’s an entry fee for the museum) and your kids will love the game route especially designed for children.

Dating back to the Middle Ages, the Gothic Town Hall of Brussels is its most recognisable landmark. In fact it is very often mistaken to be a church on account of its soaring tower, on top of which stands archangel Michael, the patron saint of Brussels. Both the building and the tower are highly decorated with statues and carvings. Inside the town hall you will find more sculptures, paintings and tapestries. The building is open to visitors for a small fee.

House of the Dukes of Brabant

Another elegant building in the Grand Place is the House of the Dukes of Brabant. This is actually a guild house or a group of seven houses with a unified façade, which was built in 1770. No dukes ever lived here; the name derives from the 19 statues of various dukes that adorn the façade on the first floor under the windows.

The most famous statue in Brussels is of a naked little boy peeing in a fountain basin! Manneken Pis was installed in the early 17th century and you can find it at the junction of Rue de l'Étuve/Stoofstraat and Rue du Chêne/Eikstraat, a few hundred metres from the Grand Place. This of course is a reproduction from 1965; the original bronze statue is kept in the City Museum. The statue is dressed in costumes several times in a week so you might find him dressed up as the mayor of Brussels or a Judo fighter.

Standing on the grounds of an ancient palatial complex, the Royal Palace of Brussels as it stands today was only built in the early 20th century. While it is the official residence of the King & Queen of Belgium, they actually live in the Royal Castle of Laeken on the outskirts of the city. The palace is used for state receptions and court ceremonies. Each year from July to September the palace is open to visitors free of charge and it’s one of the top things to do in Brussels. Visit the impressive Throne Room with its elaborate mosaic floor and eleven chandeliers. The Louis XVI Music Salon has a piano inset with semi-precious stones.

Opposite the Royal Palace lies Brussels Park, the largest public park in Brussels. The park was once part of the hunting ground of the Dukes of Brabant and also the scene of some fierce fighting in 1830 when Belgium gained independence. Catch the metro (lines 1 & 5) to get here. Many events and concerts are held at the park every year, especially during summer weekends. The Royal Theatre is located on the edge of the park.

The Belgian Supreme Court is called the Palace of Justice and is located in Saint Gilles, an uptown area of Brussels. The 19th century building is quite massive and its location gives a sweeping view of the city. The large golden dome atop the building collapsed during WWII when the retreating Germans started a fire in the building leading to large-scale damage. Most of the repairs were completed by 1947 and the dome was rebuilt two and half metres higher than the original. The building is open to public and the interiors are quite impressive with huge staircases, tall columns and decorative carvings.

The Royal Museum of Fine Arts is in fact a group of six museums containing more than 20, 000 pieces of art. The Old Masters Museum covers artworks from 15th to 18th centuries and you will find lot of Flemish Renaissance and Baroque art here. The Modern Museum contains more contemporary art while the new Fin-de-Siècle Museum is dedicated to the Art Nouveau works of the 1900s. The Magritte Museum, Meunier Museum and Wiertz Museum are dedicated to the respective artists.

Created in 1958 for the World Fair of Brussels, the Atomium is one the most popular things to see in Brussels. Nine spheres connected by 20 tubes and the whole structure resting on three pillars – the Atomium symbolises an iron crystal enlarged some 165 billion times. Six of these spheres are open to public and host exhibitions, installations, workshops, concerts etc. One entire sphere is dedicated to children and the top-most one has a restaurant with a lovely view of the city.