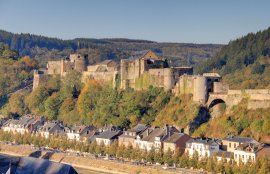 The Leuven Town Hall looks more like a cathedral than a seat of government, perhaps because the 236 statues that adorn it are set in religious scenes. These statues are on the hall’s three floors, each floor representing different people who were important to the city’s heritage. Built in the mid-15th century, the Gothic style town hall is very ornate, seeming almost lace-like. It anchors the city’s grote markt, or main square, and sits across from St. Peter’s Church.

Mons is a medieval city that today serves as capital of Hainaut Province. It is home to the only Baroque belfry in Belgium. The belfry is located on the highest point in Mons, on a square that once housed a castle; remains of this castle can be seen today. This bell tower is 87 meters (285 feet) high, with a 49-bell carillon at the top; the largest bell weighs in at five tons. The belfry, constructed in the 17th century, is topped by an onion-shaped dome.

Bouillon Castle sits on a hill overlooking the city of Bouillon. It is believed to date back to the Romans, though it is first mentioned in the late 10th century. One of its early owners sold it to finance his participation in the First Crusade. The castle has three drawbridges, dungeons and a torture chamber that visitors will see as they make their way down from the top. The castle, considered one of the best in Belgium, has a unique, layered defense system designed to protect it from invaders. 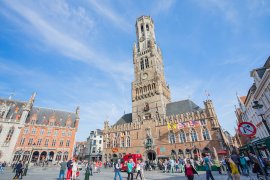 The Grote Markt in Mechelen is a large square that is the heart of the city; it is the city’s main square. At one end of the pedestrian cobblestone square stands St. Rombold’s Cathedral, the city’s largest church, while the town hall occupies the other end. Restaurants and shops, that once were private homes, complete the other two sides. When the square was getting underground parking in 2004, remnants of a 13th century road were found. Today, the square hosts a market on Saturday mornings.

Centraal Station is the main train station in Antwerp in Flanders. The stone building, which opened in 1905, presents an imposing façade to travelers. It’s topped by a huge dome that is 44 meters (144 feet) high. The station is considered Belgium’s best example of railway architecture. It also is considered one of the world’s most beautiful train stations. Trains depart and arrive on 14 tracks on four levels. Centraal Station is also capable of handling high speed trains.

Catholicism has been an important religion in the Walloon city of Tournai since the 6th century, though construction of the Cathedral of Our Lady(Notre-Dame de Tournai) did not start until the 12th century. It features three architectural styles: Romanesque, Transitional and Gothic. The cathedral has five bell towers with ceilings that reach up to 157 feet high. The house of worship is also home to The Issue of Souls in Purgatory, a painting by the great Flemish artist, Peter Paul Rubens. The cathedral is undergoing renovation after it suffered major damage in a 1999 tornado. 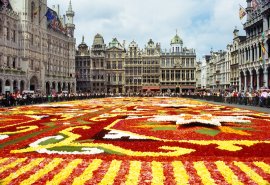 Looking at the 12th century Gravensteen Castle, one can almost picture knights in shining armor riding white horses out the gates. Which wouldn’t be too far off, as the castle was patterned after the ones that the knights saw on the Second Crusade in the Middle Ages. Over the centuries it was used as a prison and factory, with houses built in the courtyard. Scheduled to be demolished, the city of Ghent rescued it in 1885 and renovated it. It is now one of the most popular tourist attractions in Belgium. Inside is a museum of torture devices used in Ghent over the ages.

Visitors need to be in good physical shape if they want to climb the Belfry of Bruges as it is 366 steep, narrow steps to the top. Those who complete the climb of this important symbol of Bruges will be rewarded with great views of the city. The medieval bell tower dates back to 1240, built at a time when Bruges was a major player in the cloth industry. It was rebuilt after being destroyed by fire 40 years later, with other fires occurring in the centuries following. Bells still chime out from the tower today.

The Grand Place (or Grote Markt) is a must-see for visitors to Brussels. Indeed, this central square is the city’s main landmark. Surrounded by the town hall and guildhalls, the square isn’t very big, as squares around the world go but the old buildings that line its sides make it very special. The Grand Place dates back to the 11th century when markets were held. Nowadays, every two years in August, an enormous “flower carpet” is set up in the Grand Place for a few days. A million colorful begonias are set up in patterns covering a large part of the square.

Because of its canals Bruges is often called ‘The Venice of the North’. In the Middle Ages the ‘Reie’ river had been turned into a network of canals that enabled the traders to bring their products to the large Water Halls at the Market. Nowadays a boat ride on these famous canals provide a great way to see some of Bruges most beautiful sites.