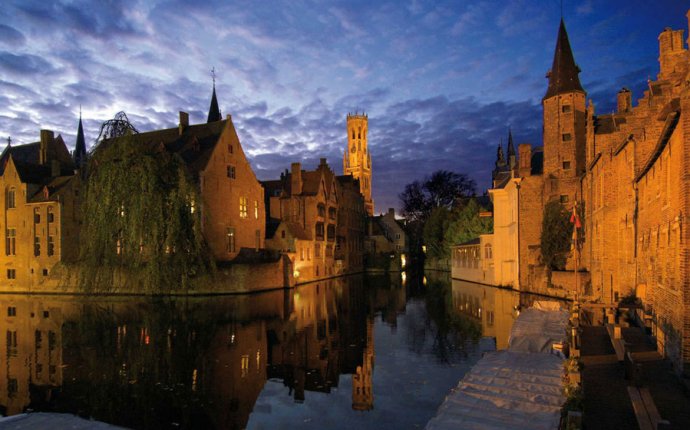 Where is Bruges in Belgium? 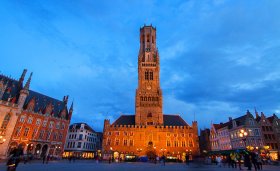 The south side of Bruges' Markt (the main square) is dominated by the Halle with the belfry - Bruges' most distinctive landmark - soaring above it. The Halle was begun in 1248 and twice enlarged, first in the 14th century and then again in the 16th century, and once functioned as the city's main market place. The building encloses a picturesque courtyard, and the balcony above the entrance was once used by the city fathers to promulgate their statutes to the populace assembled beneath.

The 83-meter-high belfry is one of the finest bell towers in Belgium and is entered from the Halle's inner courtyard. Construction of the bell tower began in 1282, and the crowning octagonal upper section was finally completed in 1482. Today, a carillon of 47 bells still hang in the tower. For the best view over Bruges, you can climb the 366 steps up to the top of the tower. On the way up, the old Treasure Room where civic documents are kept behind wrought-iron grills can be visited on the second floor.

2 Basilica of the Holy Blood

Basilica of the Holy Blood

The Basilica of the Holy Blood (Heilig-Bloedbasiliek) presides over the central plaza known as the Burg. The church is famous for the crystal vial kept inside that is reputed to contain a drop of Christ's blood brought back from the Holy Land by Dietrich of Alsace in 1149 on his return from the Second Crusade. Each year in May, this sacred relic is carried through the streets of Bruges in the Procession of the Holy Blood. The facade of the basilica with its three Flamboyant-style arches and gilded statues was erected between 1529 and 1534. The basilica itself consists of a Romanesque lower chapel and a late Gothic upper chapel, which houses relics of St. Basil brought from Palestine by Robert II, Count of Flanders. An elegant spiral staircase leads to the upper chapel (built in 1480) where every Friday the vial containing the Holy Blood is brought out and shown to the faithful. 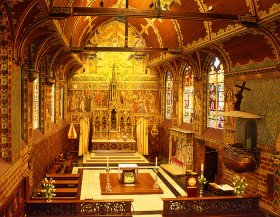 At the very heart of the city is the Markt; Bruges' bustling main square, surrounded on all sides by fine buildings from a variety of different periods. The eastern side is dominated by the Neo-Gothic Provinciaal Hof building which dates from 1887 and is the seat of the West-Vlaanderen provincial government. On the western side, occupying the left-hand corner, is the attractive brick 15th Century Huis Bouchoute. On the opposite corner stands the Craenenburg where, in 1488, at the instigation of Ghent, the burghers of Bruges kept the future Habsburg Emperor Maximilian imprisoned for 11 weeks. He was freed only after agreeing to respect the authority of the ruling Regency Council and to order the withdrawal of all foreign troops. The best way to admire all this architectural finery is to join the throngs of visitors and locals at one of the Markt's many cafés and sit for a while soaking up the historic splendour around you.

On the southeast side of the Burg is Bruges' Town Hall (Stadhuis), one of the oldest in Belgium, having been constructed between 1376 and 1420. The facade of the delicate Gothic building displays the strong vertical emphasis characteristic of the style, with soaring pilasters, three of which end in octagonal turrets, separated by tall Gothic arched windows. Statues of the counts of Flanders from Baldwin Iron Arm onwards fill the 49 niches. Inside, don't miss the great Gothic Hall on the first floor with its beautiful timber vaulting, which dates from 1402, and its murals recording events in the town's history by A and J de Vriendt (1895-1900). 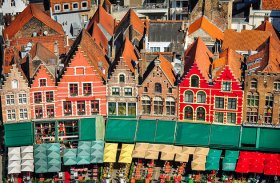 On the east side of the Burg, the Bruges Tourist Office occupies part of what was, up until 1984, the Law Courts, built between 1722 and 1727 on the site of the former Liberty of Bruges (Paleis van het Brugse Vrije) from where independent magistrates exercised jurisdiction over the region. Some fragments of the older building have survived, including the pretty 16th-century facade overlooking the canal at the rear. One or two of the more historic rooms inside are now the Brugse Vrije Museum and can be admired by visitors. Of particular interest is the Schepenzaal (lay magistrates' court) where you can see the famous chimneypiece designed by the painter Lanceloot Blondeel in 1529 and executed in black marble and oak by Guyot de Beaugrant. This magnificent piece of Renaissance craftsmanship has an alabaster frieze above depicting the story of Susanna and the Elders with carved oak figures of the Emperor Charles V and his parents, Ferdinand and Isabella of Castille, Mary of Burgundy, and Maximilian.

Head to the Dijver Canal, to visit the Groeninge Museum (Stedelijk Museum voor Schone Kunst), which holds Bruges' best collection of art. In addition to its excellent endowment of Old Flemish paintings, the museum also incorporates a gallery of modern art and a superb collection of views of old Bruges. However, the first five rooms of the museum are the ones most likely to claim your attention as they contain quite exceptional paintings by Old Flemish masters. In Room 1 hang two major works by Jan van Eyck: Madonna and the donor, Canon van der Paele (1436) and the portrait of Margaret van Eyck, the artist's wife, painted when she was 33 years of age (1439). In Room 3 are panels illustrating the legend of St. Ursula and a portrait of Luis Gruuthuse, both famous works by unknown Bruges masters, and the Last Judgment by Hieronymus Bosch is among the paintings in Room 5.

7 Church of Our Lady

The 112-meter-high spire of the Church of Our Lady (Onze Lieve Vrouwekerk) is the tallest in Belgium. Work began on the nave and aisles around 1230, the outermost aisles and chapels being added in the 14th and 15th centuries. The church holds a wealth of art treasures, among which is a sublime sculpture by Michelangelo, Virgin and Child (1503-04). The sculpture stands on the altar of the chapel at the end of the south aisle. The Calvary on the high altar is by Bernaert van Orley, the triptych Adoration of the Shepherds is by Pieter Pourbus, and the Transfiguration of Christ is by Gerard David. 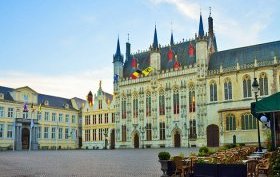 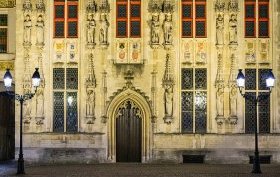 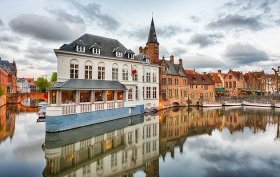 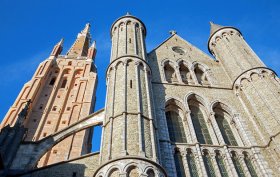