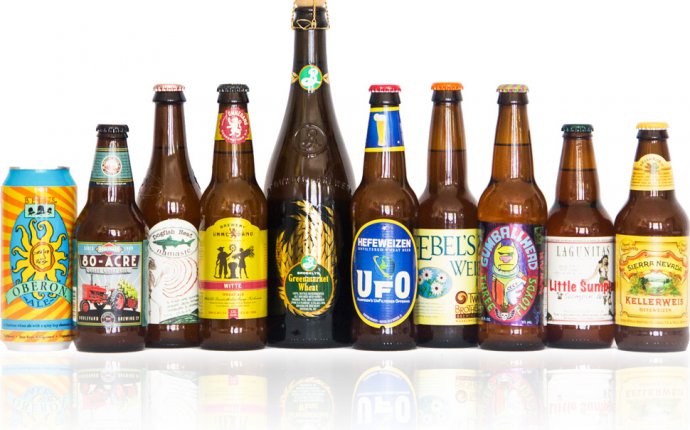 Belgian Wit is a wonderful light, refreshing beer that narrowly avoided extinction to become a popular hit here in the United States. This week we’ll take a look at the history, brewing and recipes for Belgian Wit and White Beer.

Belgian Wit goes by many names, all variations of the term “White Beer”. In French it is called “Biere Blance”, while the Flemish name is Wit or Witbier which is pronounced “Wit” or “Wet) [Ref: BT] While the style was likely derived from the Belgian Monastary tradition, it reached widespread popularity in the 18th and 19th century in the towns east of Brussels. The two beers “Biere Blanche de Louvain” and “Blanche de Hougerde” were brewed in Louvain and Hoegaarden respectively. The Louvain version was more popular.

After the lager revolution in the 1800’s and into the 1900’s, Wit gradually declined in popularity and in fact disappeared when the last Belgian brewery went out of business in 1957. Nearly 10 years later Pierre Celis raised money from family members to open a brewery called De Kluis and began brewing a traditional Wit called appropriately “Hoegaarden”.

In 1985, the De Klius brewery burned to the ground, again threatening Witbier with extinction. Pierre Celis was able to raise money from commercial sources to rebuild the brewery, but by 1987 these larger brewers essentially took control from Pierre Celis and altered the recipe to appeal to a broader audience. Pierre Celis, disappointed, moved to Austin Texas where he opened a new brewery making “Celis White” based on the original Hoegaarden recipe.

Belgian Wit is a light, wheat based beer with light to medium body, slight sweetness and a zesty orange-fruity finish. It has a clean crisp profile, low hop bitterness and high carbonation with a large white head. Traditional Wit is slightly cloudy due to the use of unmalted wheat, and pale to light gold in color.

Belgian Wit is made from a base of around 50% pale malt, and 50% unmalted wheat. Often 5-10% rolled or flaked oats are added to enhance body and flavor.

If you are brewing from extract, wheat extract might be an acceptable option, but all grain brewers should avoid using malted wheat as it will not result in the authentic wit flavor. Rolled oats are best if you are brewing all-grain as these two will work well in a single infusion mash. Where possible, high diastic pale colored malt should be used as the pale base.

Hops are typically chosen to minimize the hop profile. Low alpha hops such as BC Goldings, Hallertauer, Fuggles or Saaz with just enough hops to balance the sweetness of the malt. Late hop additions are inappropriate, as hop aroma is not a feature of the style. I personally prefer about 1 oz of BC Goldings boiled for 60 minutes in a 5 gallon batch. Dry hopping and large late hop additions are not really appropriate for this style.

The coriander should be cracked, but not crushed, whole seeds. I run my coriander seeds through the grain mill to crack them in half. Bitter Curaco orange peel is not the type you find in the supermarket, but is available from most major brewing supply shops. I recommend about 3/4 ounce of bitter orange peel and 3/4 ounce of coriander for a 5 gallon batch added 5 minutes before the end of the boil.