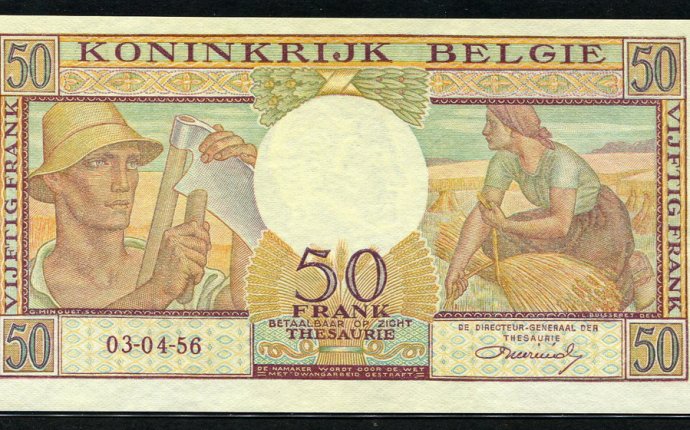 Through BLEU, Belgium and Luxembourg linked their currencies in 1921. Although the Belgian franc has declined in relation to the U.S. dollar, it has maintained its value against major European currencies. In 1995, 1 U.S. dollar was equal to 29.48 francs, but by 1999, 1 dollar equaled 34.77 francs. In 1999, Belgium joined the EMU that created a single currency, the euro, for all of the EU nations. The euro is fixed at a rate of 40.3399 francs per euro. Since its introduction, the euro has been weak against the dollar. In 2000, 1 U.S. dollar equaled 0.9867 euros (when the euro was introduced it was equal to $1.1789). The euro was only used in non-cash forms (such as electronic payments and transfers) until January of 2002, when euro coins and notes were issued and national currencies were phased out.

The Belgian National Bank acts as the state bank. It prints and issues the nation's currency and acts as the lender of last resort in certain credit operations. The bank also manages monetary policy by controlling interest rates. The Banking Commission oversees the operations of the nation's banks while the Finance Ministry regulates credit institutions.

In September of 2000, the Brussels stock exchange merged with the exchanges of Amsterdam and the Paris Bourse exchange to form Euronext. The new stock exchange is the first truly transnational exchange that combines stock, derivative, and commodity trading. The new exchange lists 1, 861 different companies and has a value of 1.1 trillion euros. The merger will streamline trading and reduce transaction costs. It will also save approximately 50 million euros per year. The exchange also increases the transparency of stocks and gives investors greater cost comparisons. The stock-trading component of Euronext is divided into 3 broad areas: blue

In order to become a member of EMU, Belgium had to maintain low inflation . The government took steps that kept inflation low—as low as 1 percent in 1999. Low prices on imported goods are likely to aid efforts to keep inflation low for the foreseeable future.