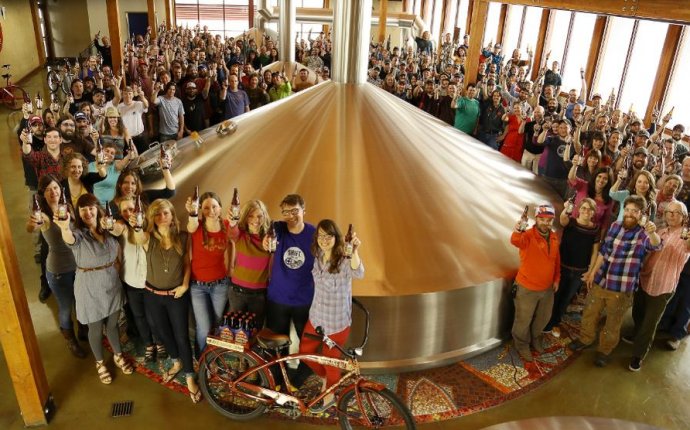 As our aspiring young homebrewer rides his mountain bike with "fat tires" through European villages famous for beer, New Belgium Brewing Company was but a glimmer in his eye. Or basement. For Jeff Lebesch would return to Fort Collins with an imagination full of recipes and a handful of ingredients ready to embark on a whole new journey.

And then there was beer.

Jeff's first two basement-brewed creations? A brown dubbel with earthy undertones named Abbey and a remarkably well-balanced amber he named Fat Tire. To say the rest was history would be to overlook his wife's involvement. Kim Jordan was New Belgium's first bottler, sales rep, distributor, marketer, and financial planner, as well as the company's longtime CEO.

In the fall of 2015, Jordan passed the torch to New Belgium's current CEO Christine Perich.

The other side of the New Belgium story might not seem as romantic as bicycling through Europe; but it gives testament to our dedication, hard work and continuous push for invention. It goes like this:

Jeff’s Belgian inspired brews garnered enough praise from friends and neighbors that Jeff and Kim took their basement brewery commercial in 1991. Kim, social worker by day and mother to two always, began the marketing process by knocking on their neighbor's door. Artist Anne Fitch was that neighbor, whose watercolors came to help craft the New Belgium brand for 25 years, including the original Fat Tire label. Our new Fat Tire cruiser is still handcrafted by a painter, Leah Giberson, but this time it's photorealism instead of a watercolor.

Bringing on Peter Bouckaert, a Belgian Brewmaster previously working at Rodenbach, in 1996 helped influence our love of sour beers. Moving forward, Peter would take the brewing reins as Jeff began pursuing other interests. In 2009, Jeff moved on completely and we have continued to flourish with Kim, Peter, and a team of dedicated employee-owners at the helm.

What else continues today?

The Core Values and Beliefs on which Kim and Jeff built New Belgium Brewing Company. Before they ever sold a bottle of beer, they hiked into Rocky Mountain National Park with a jug of home brew in one hand and a pen and pad in the other. Together, they wrote down what they wanted to instill into this business dream of theirs.

To manifest our love and talent by crafting our customers' favorite brands and proving business can be a force for good.

Which brings us to ownership

As this tasty amber named Fat Tire grew in popularity, Jeff and Kim knew they’d need help. Enter Brian Callahan, an aspiring brewer and New Belgium’s first employee-owner. By giving Brian a vested interest in the company, Jeff and Kim did “what seemed like the right thing to do.”

And all the employee owners today thank them for doing what came naturally.

Ownership is now awarded at one year of employment. And just when you think it can’t get any better, they roll in your very own one-year anniversary cruiser bike. It’s pure bliss.

And it gets better. In December 2012 the Employee Stock Ownership Program (ESOP) purchased the balance of company shares, making it 100% employee-owned.

If it were your company, what would you do? Look for ways to be less wasteful, be more efficient, recycle and reuse? Yep. It’s infectious. Once you start thinking of ways to make your company better, you can’t stop.

And, like all responsible business owners, it’s important to know your bottom-line, barrels, and books. Meet New Belgium’s practice of open-book management: a policy of fiscal transparency throughout the company that encourages a community of trust and mutual responsibility.