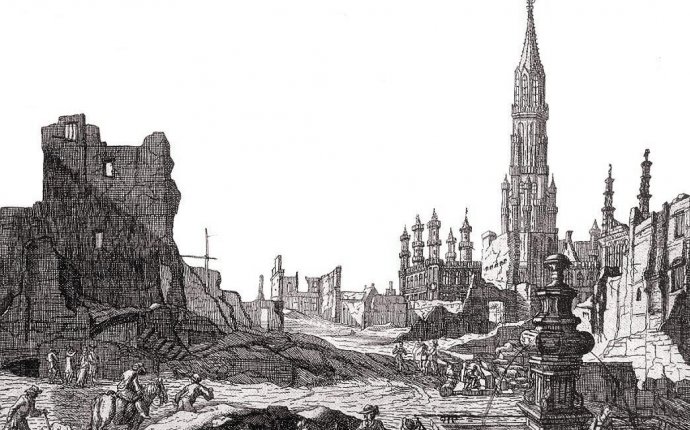 Where is Brussels Belgium located?

Brussels lies in the Central Plateaus of Belgium. Located between the Atlantic oceanfront of sandy lowlands and polders to the north and the rugged highlands to the south, Brussels has long played the role of economic and transportation nexus for the broader region that spans the valleys of the , Sambre, and s. During the medieval period, Brussels was enclosed by two successive circuits of fortification walls, constructed in the 11th and 14th centuries. The latter circuit, which encompassed the commercially important Senne and a significant escarpment to the east, was roughly in the shape of a pentagon, the trace of which is still visible from the air.

Over time, villages surrounding the pentagon were aggregated, and, together with historic central Brussels, they ultimately constituted Greater Brussels. Today, the metropolitan area of Brussels, girded by a beltway (the so-called grande ceinture), extends beyond the footprint of the 19 to encompass a fringe of the province of Flemish Brabant.

Its relative proximity to the gives Brussels a mild maritime , with daytime usually between 68 and 77 °F (20 and 25 °C) and temperatures rarely dipping below 32 °F (0 °C). With rain falling on more than half the days of the year on average, Brussels experiences a high mean annual (more than 32 inches [810 mm]) and has no discernible dry season. Snowfall rarely occurs more than two or three times a year. As Brussels is distinctly friendly, noise and are notable problems.

The historic Old Town of inner Brussels forms the centre of the modern metropolis, but the pentagonal walls that once surrounded it were replaced by a ring of tree-lined boulevards in the early 19th century. Since 1830, when Belgium became an independent kingdom, Brussels has continued to be transformed, in the Old Town as well as in the surrounding communes. The determining factor in this metamorphosis has been incessant pressure, which caused a building boom and the development of an ever-widening network of streets, avenues, and roads crisscrossing the countryside and urbanizing the neighbouring villages.

At first the urban tentacles pushed forward only along the seven or eight routes radiating from the tollgates along the old city walls, but after the toll system was abolished in 1860, they also spread along new roads. The suburbs expanded rapidly beyond the town gates, and by the end of the 19th century several of the first ring of communes were almost completely covered by residential buildings. Much like , which was radically redesigned in the second half of the 19th century by the urban planner , Brussels of this period was physically transformed. Influenced by French and architecture, Brussels’s authorities demolished medieval and Baroque-era neighbourhoods, created new beaux quartiers (“beautiful districts”), and cut wide boulevards through the city—diminishing its historically Flemish character. Modernization also brought improved sanitation to the city. In the 1860s and ’70s the highly polluted Senne was diverted around the western edge of the historic city. Its traditional course through the city centre was integrated into a new system of sewers and covered over with apartment-lined boulevards.

Expansion continued into the 20th century, in all directions: north and south along the valley of the Senne River, and east and west on the undulating plateaus separated by tributaries of the Senne. But as affluent, mainly French-speaking people increasingly moved into leafy communities on Brussels’s periphery, many Flemish speakers viewed the metropolitan growth as an incursion into their territory. Thus, in the latter half of the 20th century, legislation strictly confined the city within the limits of its 19 constituent communes.

Historically split by topography into a riverside merchant district and an elevated elite area to the east, central Brussels today remains divided between the western commercial quarter, or lower town, and the eastern upper town, where the principal government buildings are situated. The commercial quarter extends from the western outer boulevards to a little east of the central and includes the medieval marketplace known as the Grand’ Place (Flemish: Grote Markt), the city’s premier architectural tourist attraction. This square, with its elaborately decorated 17th-century , lies at the heart of the Old Town. It is occupied on its south side by the imposing Town Hall (French: Hôtel de Ville; Flemish: Stadhuis) and on its north by the ornate King’s House (Maison du Roi/Broodhuis; almost entirely rebuilt during 1873–95), which contains the Brussels City Museum. The area surrounding the Grand’ Place, known as the Îlot Sacré (“Sacred Isle”), includes the late 19th-century Stock Exchange. Perhaps the most famous curiosity of this quarter is the Manneken-Pis Fountain (1619), noted for a small bronze statue of a boy urinating and known to the people of Brussels as their oldest “citizen”; the statue is adorned in various costumes throughout the year to mark festivals, , and other events. Other highlights of the lower town include two preserved 18th-century squares, the Place du Nouveau Marché aux Grains (Nieuwe Graanmarkt) and the Place des Martyrs (Martelaarsplein), located northwest and northeast of the Grand’ Place, respectively.

The upper town is the remaining eastern area of the inner city. On the rue Royale (Koningsstraat) stand the Royal Palace and, to the north, the Palace of the Nation. The Royal Palace is flanked to the west by the late 18th-century Place Royale, a symmetrical Neoclassical square conceived by French architects Nicolas Barré and Barnabé Guimard to evoke the royal squares of France. The Palace of the Nation was erected (1779–83) when Belgium belonged to the ; after independence it became the home of the Belgian Senate and Chamber of Representatives. The two palaces stand at either end of Brussels Park, in an area that has become a symbol for the national . North of the Palace of the Nation, and dominating the northeastern end of the historic city, is the Cité Administrative, built between the late 1950s and early ’80s and originally intended for national government functions. The complex’s austere international style drew much criticism, however, and its buildings were largely abandoned by the early 21st century. At that time, in a public-private venture, Brussels made plans to transform the Cité Administrative from an obsolete modernist monument into a mixed-use complex featuring renovated offices, expanded green space, recreational facilities, and a substantial amount of housing, thus reintegrating the site into city life.